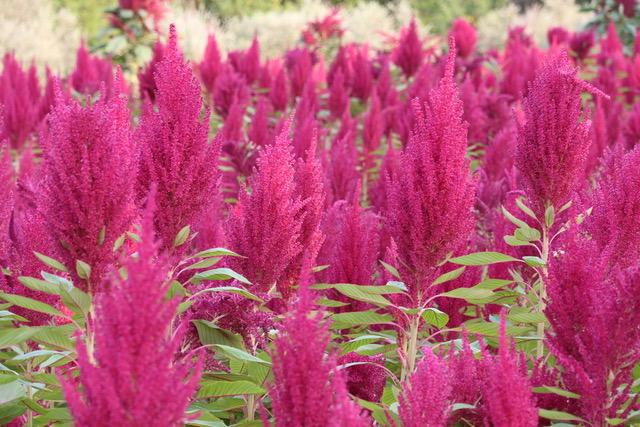 Since the 1970’s, this non-cereal plant has received a lot of attention. The reasons are many: Amaranth grain is packed with amino acids, giving it a uniquely whole protein content. It’s remarkably flexible - the tiny seeds can be cooked, roasted, popped, flaked, or ground into flour. Moreover, some varieties of amaranth leaves are digestible and tasty when cooked, unlike the greenery of many other grains. And there’s decorative value. Late in the summer some types of Amaranth top out at six feet and are capped with brilliant red, yellow, and orange fronds.

Plus, Amaranth has international cachet - and sympathetic history.

I’ll get to those in a moment. There’s one more important bit about Amaranth grain and flour: as a baking ingredient, I find it hard to love.

Amaranth has a big and not entirely attractive flavor: strongly grassy. Not “grassy” like the resinous lushness of cannabis. More like a fresh-cut lawn. Taste a finger-dip of raw Amaranth flour and you’ll see what I mean. However, once the taste has traveled through all the sensory bits in your mouth, you might sense the potential. The flavor profile is mostly one-dimensional, and its potency suggests places where other flavors can lodge, contribute, enhance, and offer balance. In other words, Amaranth is best seen as a flour component begging for strong companions.

Tasting raw amaranth gets the brain engaged. “What will work with this?” the curious baker wonders. It turns out, quite a bit.

Fruits for one. Banana is a natural friend. As are tart and spiced apples (think cinnamon, nutmeg and cardamon.) Cheeses do the trick too. And chocolate. Orange too; maybe rhubarb?

Other grains are good companions as well. Rice, millet and oats blend successfully with amaranth, ‘though the function here is primarily to tamp down amaranth’s aggressiveness. Gerber, the baby-food company, manufactures a rice/amaranth porridge for the Mexican market, and in some African countries amaranth is used as a companion to corn.

To start exploring amaranth, it’s perfectly fair to use it in a flour blend that intentionally submerges that strong taste, and then find your way to higher concentrations and more challenging uses as your taste buds suggest. A good initial blend is 1 part Amaranth flour, 1 part rolled oats, 2 parts brown rice flour and 2 parts modified tapioca starch. This blend not only tastes good -  grainy, mildly spicy and vaguely herbal - the mix of flours and starch helps minimize the structural problems inherent with gluten-free grains.

Mild but nutty-tasting brown rice helps ease the vegetative edge from Amaranth, taking the taste in a familiar, less-aggressive direction. The tapioca starch adds chew, elasticity, moisture retention and more tempering blandness. It also provides a crucial boost of starches to help “set up” or gelatinize during baking, providing structural integrity to the finished product. Finally, the oats offer interesting mouthfeel and also contribute their protein, avenensis, which is strong and extensible. Sort of like gluten but without those problematic DNA bits that provoke celiac disease.

Now for the history and cachet.

As I discovered while researching Amaranth, I was already familiar with the plant. A common species from the genera was the nemesis of my childhood: Pigweed. Which made my summer gardening chores excruciating. Not only does pigweed have a stubborn root system but it seemingly could grow waist-high overnight. I was constantly hoeing and tugging it out.

This variant - native to the temperate United States - is just one branch of the amaranth family tree. Tropical versions were the original seed cultivar. Native to South and Central America, amaranth was used for 4,000 + years, surviving as cultural touchstone and crucial nutrient even after the Conquistadores tried to root it out. (Apparently the Spanish banned it because an important Aztec festival, in which amaranth was the sacred food, ended with human sacrifices.)

Amaranth protein is so nearly complete from a digestive standpoint that it became a foundational nutrient of the Aztec civilization, second only to corn.

To this day, amaranth products in Mexico include masks and ritual ornaments decorated with puffed amaranth used during Day of the Dead (November 2).

Following their unhappy 15th century contact with the Spanish armed forces, amaranth cultivars spread around the world, finding an enthusiastic welcome in India. Here it has been farmed, hybridized and eaten for around 500 years. It’s in India, and later Africa and China, that amaranth greens found their way into the human diet. In China both grains and greens are widely used for animal forage. In India, amaranth is combined with other grains and spices for a list of intriguing foods, often in ways prescribed by Ayuvedic beliefs. When people fast from meats or dairy, amaranth is a useful protein alternative.

Recently, researchers have suggested adding amaranth flour to corn masa for functional gain, and the grain is a component of one of the Gerber company’s Mexican baby foods.

The fact that one or another of the amaranth species grows in almost every part of the world means most cultures have tried it at least once.

That said, there’s no deep amaranth tradition in North American cuisine, although farmers in Missouri are growing it in quantity and it’s appearing with increasing frequency as a “health food.” Lack of a tradition opens the door to invention, as adventurous cooks and eaters are discovering. Watch for amaranth-containing baked goods to appear on a restaurant near you, and keep your eyes out for the greens. Your taste buds will discover, I think, the reasons for the rising fuss about this ancient, big-shouldered food. 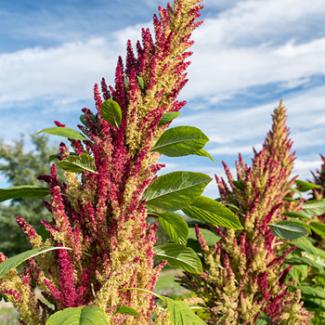 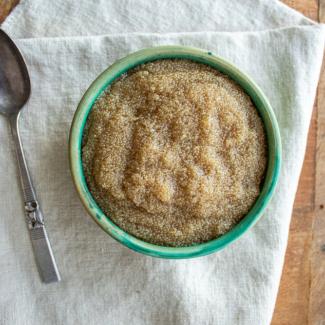