I believe I know in advance what most readers will think when encountering the word “Buckwheat”: “Ewww - wheat!”, or,  “Pancakes!”

I’m here to tell you it’s not all that simple, because, A) Buckwheat is not a form of wheat, and, B) it’s great for so much more than pancakes.

First the facts. Buckwheat seeds are technically herbs, not grains - or at least not cereal grains. This isn’t an important distinction for the civilizations that have enjoyed buckwheat foods for thousands of years but it’s meaningful  when we start combining it with other products for taste and performance. Like "real" grains, buckwheat can be ground into powders coarse and fine, used to make a huge range of baked goods, cooked without milling in porridges and accompaniments, and depended upon for important nutrients. Buckwheat flour even has properties that remind us of other baking flours, since it absorbs water at a predictable rate and makes a sticky, cohesive dough which isn’t inclined to fall apart when baked, or to dry out lightning fast.

As a point of botany, buckwheat is part of the same plant family that includes rhubarb. Some claim an ability to confirm this in their taste buds but it’s never worked for me. On the other hand, buckwheat flour does have a very unique and relatively “big” flavor, one that invites straightforward use and creative pairing.

I grew up with buckwheat, and like many of my ethnicity and age, that meant buckwheat pancakes. These were a winter treat, a once-in-a-while breakfast my mother made when time and inspiration moved her. The night before, she would mix a batter of unbolted buckwheat flour (more on that, later), wheat flour, sugar, yeast and water, then park the oversized brown bowl (used exclusively for buckwheat batter!) in a warm spot near the heat registers. In the morning we’d awaken to a tart-smelling, cement-colored monster that, to use the expression of my French friend Claudine, had “Crawled out of the bowl.”

Structurally supported by the glutenous wheat flour, fed by the sugars, and spiked by the yeast, the batter had become a rising dough. However a sharp eye would note that this batter, by morning, had begun to shrink. Plus it had acquired a sour, beer-like aroma. In the parlance of bread bakers, the batter had fermented to its fall-back point, meaning the yeast cells had run out of food and had stopped producing the CO2 gas which creates “rise”. They’d not stopped reproducing nor eating, however; in fact their diet had become the  complex carbohydrates locked within the grain and herb flours. It was this process that produced the sour aroma - and taste, as we were soon to discover.

My mother would stir down the swollen batter, add oil, brown sugar and baking soda, give the mass a good blending, then start making pancakes on a lightly greased griddle. The cakes were wonderful, mildly sour and deeply rich, begging for butter, molasses and maple syrup yet light enough to enjoy in large quantity. Despite my family being relatively large - we were five - we could never finish off a full recipe, so my mother saved leftover batter as a sourdough starter, which she would use instead of yeast for subsequent batches.

A buckwheat pancake breakfast wasn’t only a keenly awaited feast, it was a conversation starter. Mom and Dad would reminisce about their separate families and how important buckwheat had been. Dad had been a farmer; buckwheat was to him a “cover crop”, something to be planted on fallow fields then plowed under as fertilizer. The pancake recipe had come down on my mother’s side, along with that brown bowl, through generations. Her family had always used the buckwheat flour made in Youngstown’s water-powered stone mill. It was unsifted, a blend of coarse and fine grit. This is what bakers call “unbolted.” The point on which both Mom and Dad conjoined their buckwheat narratives was that “In the old days” farmers would eat the pancakes with corned beef gravy.

I’ve held onto my mother’s buckwheat pancake recipe now for more than 40 years, adapting it to be gluten-free and developing some of my bread making techniques from insights it’s given. No other buckwheat pancake formula comes close in pure and delicious flavor, particularly those which use dairy and egg. But through all these years and batter permutations I never heard of the corned beef gravy pairing.

But let’s return to the idea that buckwheat shouldn’t be limited to pancakes. As I demonstrated when at Luce’s Gluten-Free Artisan Bread, unbolted buckwheat makes an excellent sourdough bread (although I did have to rebrand it as “Whole Grain Sourdough” to overcome name-based resistance). My friend Paul Sadowski uses fine buckwheat flour to make the crepes essential to French mushroom crepes. Buckwheat groats can make Kasha; they can be coarsely split to provide an excellent breakfast cereal (it’s even better when mixed with Teff grain); they can be softened by soaking and incorporated into artisan breads for interesting mouthfeel. And so much more.

An excellent starting point to explore the uses and opportunities for buckwheat flour is to bake cookies. The recipe I use is an adaptation of one that first appeared in the New York Times. I’ve found it to be very easy, very fast, and extremely delicious.

The adaptations I’ve made give these cookies a distinctive shortbread texture and flavor. These include using unbolted flour, and making a blend of coarse and fine grit. This diversity adds a solidity to the cookies, lending to the shortbread experience, while at the same time being quite tender.

I’ll think you’ll see how buckwheat cookies earned their headline status on the recipe pages. Simultaneously solid and delicate, plain-looking yet complex tasting and a mysterious pale brown, they’re a perfect launch into a long and rewarding Buckwheat Baking Binge. 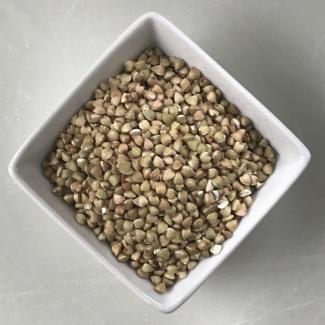