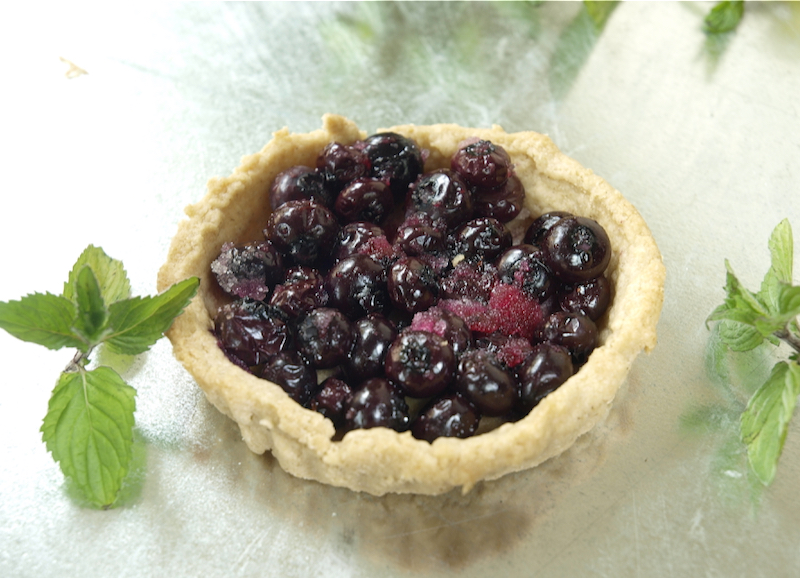 The 9 Grains strategy pairs the unique flavor of oats with tart, sugar-sprinkled and coconut-flavored blueberries to make an exceptional tart. Use end-of-the-season market berries, or South American imports. Both will shine on this light, puff-pastry crust.

1) Measure oat flour, tapioca starch, salt and xanthan gum into a medium bowl and whisk until thoroughly blended. In the small bowl, mix the vinegar and water. Place into the freezer. Cut the butter stick into 1-tablespoon chunks and toss chunks into the flour mix. Toss with a fork until all the chunks are covered with flour.

2) Turn flour/butter mixture out onto plastic work surface. Using the rolling pin, tap the flour-covered butter chunks to begin flattening them, re-covering butter with flour as needed. As butter chunks become more ductile, place one end of the rolling pin against the work surface and work the other end up and down, like a lever, flattening the butter chunks into thin slabs. Finally, roll the butter-flour mix to create a uniform piece of thin-slabbed butter and flour mixture.

3) Use a bench knife or frosting spatula to toss the flour/butter slab into a loose mound. Make a small cavity in the top and add 1 Tablespoon of the water/vinegar mix, including any ice that may have formed. Toss up the sides of the flour blend to cover the cavity, roll the mix until about 1/2 inch thick, then create a new mound, make a second cavity, add a tablespoon of liquid, toss flour over this, and roll. Repeat until all liquid is added. Roll, fold the flour, re-roll and re-fold until a thick, barely-wet dough forms. Fold into a block that's about 1 1/2 inches thick, wrap in plastic and refrigerate at least 4 hours or overnight.

4) Heat oven to 425. Grease a small baking dish with coconut oil. Place dough on an oat-flour-dusted work surface and roll into a 1/8 inch-thick slab. The dough will be resistant at first but begin to "flow" as it warms. Frequently run a frosting spatula or bench knife under dough to prevent sticking. If making 4-inch tarts, cut dough into 6-inch circles and transfer to tart tins. If making mini-cupcake-size micro-pies, cut dough into 3-inch circles and transfer to mini-cupcake tray. Gently push dough into the tins or tray indentations. "Repair" any fractures with dough fragments.

5) Bake tart crusts for 12 - 15 minutes, or until edges are light brown and bottom is bumpy with puffed areas. Meanwhile, measure the blueberries into a medium bowl. Add sugar and coconut oil, stir until well blended, and transfer to a baking dish.

6) When tarts are done, remove from oven and re-set oven to 350 F. Place berries into oven and bake 10 minutes. Use a spoon to place hot berries into tart shells. Return filled tarts to oven for 10 minutes. Remove, cool on a rack for 5 minutes, then remove shells from pans to prevent further baking. Serve warm, optionally with ice cream or whipped cream.